The pound sterling is the oldest existing currency, with origins that can be traced back to continental Europe.

The name of this currency comes from the Latin word “libra”, which refers to weight and balance. For more than 300 years the Bank of England has been the authority issuing pound banknotes, and all along this time these notes have suffered many changes.

The first pound coin did not appear until 1489, under the reign of Henry VII. Pound banknotes started circulating in England shortly after the foundation of the Bank of England in 1694, and were originally handwritten notes. The pound functioned with its complicated system of shillings and pennies until the arrival of the decimal system in 1971.

In 1660 coin minting was mechanized and features in its design such as the side lettering were introduced to help eradicate money-clipping.

The pound sterling has survived as an independent currency while most of the rest of Europe adopted the euro as single currency, which at the beginning of the 21st century seemed the likely destiny of the pound sterling too.

Regarding the “pound scots”, it existed until the 1707 Union Act created a new monetary system based on the value of the pound south of the Scottish border. The Bank of Scotland was created in 1695, just one year after the Bank of England, and it still survives today as part of HBOS, a subsidiary of the Lloyds Banking Group, based in Edinburgh.

The pound sterling is the official currency of the United Kingdom (made up of England, Scotland, Wales and Northern Ireland).

Right now there are five different denominations for banknotes in circulation, for 5, 10, 20 and 50 pounds. There are also £1 notes but they are a rarity as they are printed in Scotland. All pound notes include certain security measures. For more information about these, check the web page of the Bank of England. 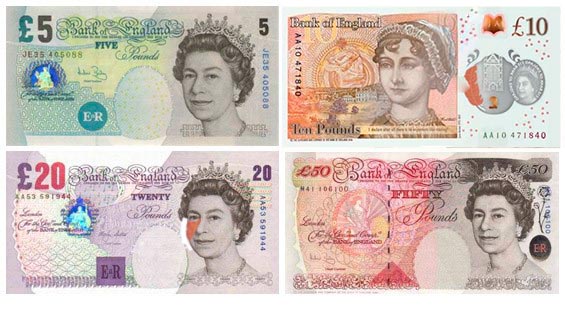 Regarding to coins, the ones currently circulating are of 1, 2, 5, 10, 20 and 50 pennies and 1 and 2 pounds. Occasionally special editions of £5 coins are issued but their circulation is merely incidental.

Why change currency with us rather than your bank